Shamika dealt with persistent dry, cracked skin from early childhood into her adult years. Still affected by eczema symptoms as a mother, she seized an opportunity to potentially find a solution.

Shamika, a 29-year-old mother of two young daughters, has lived with eczema (atopic dermatitis) since she was a toddler. The condition and its symptoms have been constants throughout her life — including before and after her participation in a clinical study for an eczema treatment several years ago.

As a child, Shamika had difficulty at school because of her condition. She also lived with allergies and asthma, but the visible symptoms and physical discomfort of eczema made things particularly challenging. Areas of darker skin color, or hyperpigmentation, only added to her concerns. “My skin was ugly and itchy,” she says. “School age was hard.”

As she grew up, Shamika’s parents limited her exposure to settings, pets and fabrics that might exacerbate her symptoms, but with limited success. Even into adulthood, she found that clothing was irritating. Seasonal changes would cause flare-ups. Even being touched could be painful.

In the late 2010s, Shamika was managing eczema symptoms along with the responsibilities of being a new mother. When she saw an online advertisement for a clinical study for the condition, she inquired without hesitation. “I needed to try to find some relief,” she remembers. 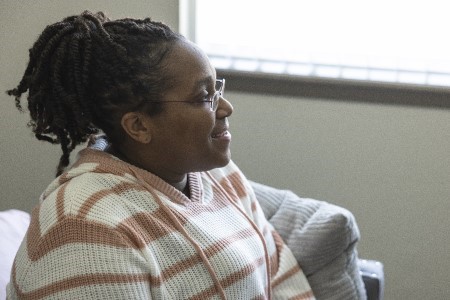 Shamika soon was participating in an eczema clinical trial, receiving an investigational intravenous solution at a study clinic near her Oklahoma home.

The care Shamika received during her study participation made a lasting impression, and her positive interactions with the staff continued beyond her active participation in the study. Shortly after the eczema clinical trial ended, she became pregnant with her second daughter. Throughout her pregnancy and after she gave birth, staff members would check in with both her and her children.

Unfortunately, Shamika’s skin symptoms have returned over the several years since her participation in the study ended. Instead of being frustrated by this, she focuses on the promise of potential future treatments being evaluated in additional clinical trials today.

When Shamika meets someone living with eczema, she tells them about her clinical trial participation and encourages them to consider if a clinical trial is right for them.

“If you’re healthy and able to [participate in a study], it’s worth it. If I could go through it again, I really would.”

FAQs
Back to top